skip to main | skip to sidebar

Falling all over Fall

So it's that time again - burninating leaves, cooler temperatures, smashed pumpkins...and a new batch of jewelry with warm, happy fall-inspired colors to drool over! :)

Summertime, and the livin ain't easy...

I wish I had time to cover all of the bases and talk about ALL of the STUFF I've been creating, but I'm uh...sort of busy making stuff. And swooning. And fanning myself a lot. And eating ice cream. And trying to catch up on work because all of this fanning of myself is getting me behind! I need a couple of naked dudes to stand around fanning me. And feeding me grapes. Oh yes.

I want to talk a little bit about craft shows. Who here has done one? I tried once...it was a freakin' nightmare. I'm always so busy preparing that I'm not prepared enough to actually deal with the general public. I love using Etsy to sell my wares -- I can concentrate on and celebrate each piece individually. And the entire planet can see it - not just Mrs. Jones whose neighbor's daughter's cousin-in-law makes jewelry, and do I have anything in mauve? With teddy bears on it? And can she haggle it down to 25% of my asking price?

I'm convinced that not only does the world not understand art...but the world doesn't understand that handmade stuff is special. Somebody's hands made that piece of art jewelry there. It contains a chunk of their soul, and if it's finely handcrafted and carefully created, it's worth the price. And there is inevitably some asshat out there who is going to rip it off and charge a fraction of your cost...but that's another blog for another angst-fueled time.

I also had an experience with a retail seller who wanted to place my jewelry in their store. This might have gone alright had their store been open. And if it were in a location that people actually frequented, and not a dead mall in a dead city. They also hit up the craft fair circuit, and offered to take my work on the road. Which sounded awesome! Until it turns out that there are a lot of schmo's out there making a lot of cheapass jewelry that everyone is too busy fawning over to buy quality handmade merchandise. See above rant. :-\

I think I'll stick with Etsy for a hot minute, y'all.
Posted by Andi at 7:33 PM No comments: 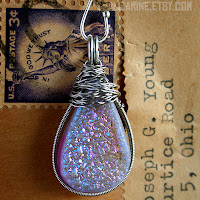 I've been having some fun with rocks and guitar strings at my bead table these days. My latest love has been wrapping colorful druzy pendants. I'd have more photos, but folks seem to be snatching these pendants straight off the table! I've also taken to wrapping simple gemstone earrings. It makes them a lot more versatile to wear AND gets rid of this massive stash of gemstones I keep hoarding. :)
Posted by Andi at 6:42 AM No comments:

Do YOU get a little warm in your heart when you think of Winter? I don't. Ever. But some folks do...and this month must be for them, what with the near-record snowfall and all. I am not a fan.

But for those folks who are? Enjoy these lovely winter-inspired pieces! Think of me trapped indoors while the wind whips snow around the city and makes everyone forget how to drive one more time: 'Moonlight' Bracelet
Posted by Andi at 7:14 AM No comments:

As much as I try to stick to my signature guitar string jewelrymaking stuff, I'm so unbelievably addicted to playing with all of the beautiful, intricate filigree stampings that are floating around out there. It's right up my alley -- I'm a sucker for anything vintage, antique, Nouveau, Deco, Victorian...yep. Another day, another donor

I've been getting lucky with string donors, lately! I love it! Many thanks to Carol for the latest batch of fun! This is what I've been up to lately: The 'Prayers for Rain' bracelet - made entirely of semiprecious stones in shades of blue. Well, almost. There's some metal in there holding it together. This is such a beautiful piece! I'm not just saying that because I made it. It truly takes my breath away a little bit. :) 'A Forest' - can you tell I'm a little fixated on The Cure lately? ;) This one is also all stone. In pretty greens and earth tones. It makes me happy. The Head Hunter bracelet is getting rave reviews all over the place! I used my new strand of the blackest black pearls ever to make the 'Contrast' earrings. These spiffy pearls are going to make their way into everything, I fear. I linked to the original seller - check out her store if you're looking for fun and unique gemstone beads that won't kill your wallet. Neatothings is my go-to store for small quantities of well, super neato things to play with! :)
Posted by Andi at 8:16 AM No comments:

I am a crappy blogger. Buuuuut, I have a few new pieces to share that totally knock my socks off! I've been experimenting with fun new 'colors' of guitar strings sent to me by a wonderful new string donor. Thanks, Sharon! :) Take a look! Gold teardrops with citrine! I love 'em!
Posted by Andi at 12:22 PM No comments: